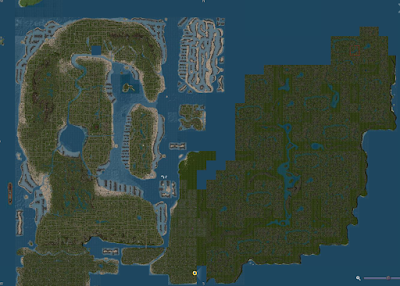 Last week, a huge land mass of sims appeared to the east of Bellisseria, though were separated from the landmass and closed to the public. Last night, the gap had been filled, and the sims in the new areas were apparently all open (the map on the left is more accurate than the one above as zooming out cut a few of the sims).

East Bellisseria is a continent in its own right. Going about, there were both log and Victorian style Linden Homes. There were also forests, streams, wide rivers, bridges, beaches, and hill ranges. Where there once had been a the gap separating the closed land from the open were many of the mounds of hills. But some of these peaks deeper inland  were over 100 meters high.

Yours truly saw some people waiting in groups at the edge on Tuesday afternoon, March 31. So the sims may have been opened on April 1. And some of them had some funny names appropriate to the day, such as "Spruce Spingsteen," "Darling Clementine," "Gold Spitoon." "Whyne," "Hootnanny," "Jester," and "Fools Errand." One can always "Pop Over" and turn a "New Leaf." They can do a "Poormans Wager," Or head up the "Wazoo." "Gesunheit."

The Moles have apparently been very busy. Stay tuned for more information.