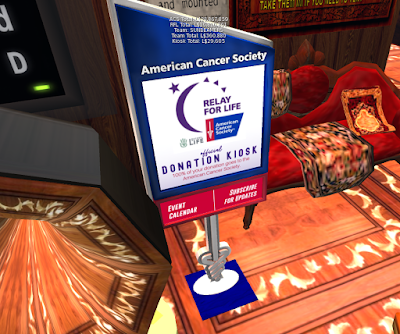 It was a little less than a month ago that the Relay's Team Sunbeamers reached Platinum rank for this year's fundraising season. Over the next few weeks, it slowly made it's way up to in the 290,000s. Then yesterday, a few events took place. Early in the morning was a joint event between the Sunbeamers and Team Relay for Christ at Distraida's Fishing Area in Alua, with DJ Matt playing the music.

Then came the carnival, with Shockwave Yareach and Cynthia Farshore's bumper car demo derby being the star attraction. While there were periods of quiet, there was no shortage of bumping and explosions. About 15,000 Lindens would be donated into it's kiosk between 8 AM and 4PM, much of it in a last-minute surge of visitors, whom were just as happy to chip into the kiosk as well as blowing something up.

Finally came the end results of Nydia Tungsten's "Bid Me" event. This part of the action got the most Lindens, and will be described in detail tomorrow. What we can say now is it raised the most of any Team Sunbeamer "Bid Me" event, and had results unlike most. But at the end of the day, the team total had passed both the 300,000 and 350,000 marks, ending up at over 360,000 Linden dollars raised.

Stay tuned for the results of the "Bid Me."