It's been an interesting week for Matt Carlton, aka DJ Matt. To begin with, Saturday March 28 was the last day for her "Bid Me Feral" event for the Relay for Life's Team Sunbeamers. The event netted 15,250 Lindens, so Matt has to spend the next six weeks on all fours.

But just as Matt was getting used to the feral side of virtual life, she had an event to perform for. The Relay Rockers were hosting the "Fight Back Top DJ Fundraising Competition." And on Wednesday April 1, the first event of it took place at Arinultra Cay, with Matt as the DJ.

Game On!
The BIGGEST MUSICAL COMPETITION IN SECOND LIFE,
Celebrate – Remember – Fight Back Top DJ Fundraising Competition 2020
In support the Relay For Life of Second Life and the American Cancer Society

COME OUT AND SUPPORT ALL THE DJS!!!

Matt showed up in her custom nine-tailed Spirit Fennec avatar. Unlike her "tigerkitsune" feral, it could dance away. "I may be tiny and floffy at the moment," she commented, "but that don't mean we can't raise some big money!" The donations quickly began coming in, Matt saying after a few minutes, "My buddy Olde sent a 1000L to help get stuff going, passing that in now! Let see those Lindens build!" Trader1 Whiplash added, "I think Matt deserves a match.  Who will match my L$1000?"

Matt played a mix of songs, with the majority being country music tunes. This went well with some in the crowd, "There's an Unspoken Law within Distraida .. you have to like Country Music to live here. *gigglefits* That's not true, but it's been a running joke between those within us since the year 2004." With songs like Randy Owen's "Braid My Hair," she commented, "these songs paint the reality of cancer so well." Someone responded, "Dammit Matt, you didn't give a tissue warning. And tissues are out of stock at Walmart!" Matt encouraged the crowd to keep donating, "Every bit helps and goes a long way to help fight cancer. Thank you all again and keep the love coming." 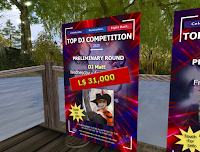 Although this was a Relay Rockers event, DJ Matt is of Team Sunbeamers.  Other teams were represented such as Mieville Steampunks, Seekers of Hope, Relay for Christ, Cure Chasers, Team ACTS, and more.

Several DJs follow Matt, the top four taking part in the semi-finals on May 2 and 3. Having gotten over $120 USD worth of Lindens in an hour, DJ Matt has set a pretty high bar.