Last week's April Fool story in the Newser was one of our more successful ones in terms of response. The first picture was the Newser building in Nydia Tungsten's Minecraft server, built by Jasmine Dawn. "Sneaky and clever" one reader called it."You got me," commented another. Still another deadpaningly suggested I delete the article in the grounds Linden Lab with their mentality might actually do what was in the joke article. Most just laughed, or groaned.

With this April being a particularly bad time, with the world in the worst epidemic since the Influenza Pandemic of 1918, pretty much everyone agreed that joking about spreading the virus wasn't funny at all. Some countries warned that spreading "Coronavirus misinformation on April Fools Day" was punishable by jail time. There were also a few suggestions from some that April Fools jokes shouldn't be done, period. But with so many essentially trapped in their homes on the verge of going stir crazy, more felt the country needed a chuckle more than ever. 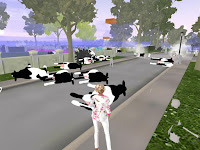 As it turned out, the Newser's prank article wasn't the only April Fool played in Second Life. Gemma Cleanslate was witness to the Moles pulling some foolery of their own. Firestorm got into the act, with it's "Message of the Day" appearing scrambled, but I was told was actual languages (and unfortunately I never got a screenshot).

In the world of gaming, World of Tanks had a game called "Turret Town." War Thunder had a special game for the next few days : "Space Thunder." In Guild Wars, giant cats appeared in various places in the game. In Overwatch, googly-eyes appeared on characters.

Minecraft added a new feature that at first looked like a clever joke, tossing signed books into nether portals creating new dimensions. But it looks like an actual new feature.

There are a few more listed in PC Gamer and  Destructoid, such as a supposed "Ducktales" game in the making that turned out to be just "April Fool."