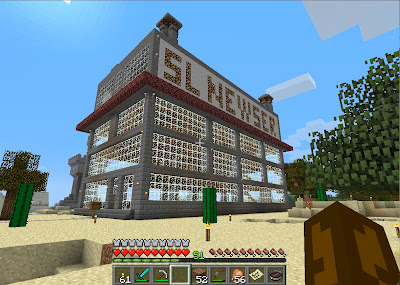 When Nydia Tungsten first invited me to her Angels Village in Minecraft, she reserved a small cabin with my name, christening it the "MC Newser." As others in the server were making various places away from hers, I had the idea of doing my own: an office building. It was made in a patch of desert not too far away from Angels, and within sight of a desert village christened "Torchlight." After some weeks, three floors were complete, and a sign made of of white and black wool on top on the side facing Angels. While I planned to finish it, I was busy with other things, and it sat there, remaining less than complete. 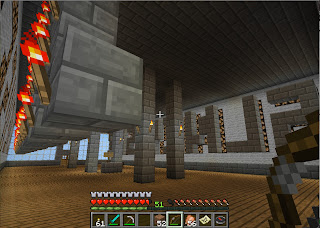 Jasmine Dawn Shuftan however has been on a building spree in Minecraft. And after my help with her tunnels, she took it upon herself to not just finish the office building, but improve on it. She replaced the black wool with glowstone, with redstone torches just behind them, resulting in a sign in which the letters glowed brightly at night. Then she made a second one on the other side.

Finishing the roof, she added one more touch: five small towers, one for each corner and the center. They have lamps triggered by mechanisms added in recent updates. When the sun goes down, they light up.

So now the office is pretty much complete. While I may add some furiture later, the job is pretty much done. But Jasmine continues to work on her place far to the north of Angels, sometimes called "Jazzytown" by others. So there are still things to do here.