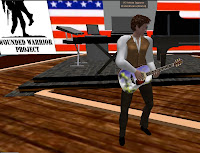 On Sunday May 26th, the evening before Memorial Day, Veterans Isle hosted a Wounded Warriors Benefit concert. From 6 to 9PM SL time, three musicians performed live for the audience at the stage for the veterans community and friends of. The event was in part organized by guitarist Frets Nirvana.

ABOUT WOUNDED WARRIORS - Wounded Warriors program has developed significantly over the last several years to include advocacy, benefits counseling, caregivers retreats, coping/family services, peer mentoring, warriors to work and many other. http://slurl.com/secondlife/Veterans%20Isle/70/216/23

For the first hour, DennyMac performed on stage. From 7PM SL time to 8, Frets Nirvana himself performed for the crowd with his guitar. And in the last hour, Avantgarde Frequency played his piano. Just after Avantgarde got off the stage, Frets made an announcement, "Folks we raised 160k for Wounded Warriors tonight ...thank you to all who supported!"

There was an announcement of another event the following evening on Memorial Day. But events didn't go as planned, and instead a DJ performed for the small crowd.

Veterans Isle holds a monthly concert on the last Sunday of every month for The Wounded Warrior Project.
Posted by Bixyl Shuftan at 6:00 AM