"Walpurgisnacht" and "Halloween in May"

Last weekend, two communities engaged in some spook-tacular events. On Friday May 3rd, the Steelheaders held a "Walpurgisnacht" dance. So what is Walpurgisnacht? It's a Spring festival celebrated in parts of Europe, named after an English missionary. Set on April 30th or May1st, it's exactly six months from Halloween. In Germany, witches and sorcerers were believed to meet up on that night, so it has taken on something of a spooky theme. 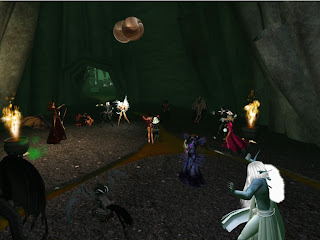 Steelhead has a number of German-born residents, such as a number of the mad scientists, the Jagers, and of course Baron Wulfenbach. So came this notice:

The Consulate is going to host the Friday Night Dance for Walpurgisnacht that celebrates the "coming of spring and the return of the tourists which is why we pretend to be demons to protect ourselves.'

Dropping in, there was quite a number dropping about. Unfortunetly, most everyone remained grey to me for quite some time. Fortunately Garnet Psaltery was willing to share her pictures with me (above).

Fuzzball Ortega was there in his werewolf form, Lunar was there, his outfit leaving him a little bare-chested. The Baron was there as well. Many others took on monster looks, including a "demon skunk" who dropped in after I did. Streams of lava flowed on the ground, though everyone stepped around them or there was some magic protecting those around. Firey flames burst forth from burning caldrons. But in the middle of it all there was a tree that somehow remained fresh and green, where some of the dance balls were.

There was the usual amount of Steelhead wisecracks, including a number of "monstrous puns."

More pictures of Steelhead's Walpurgisnacht can be found in Garnet's Flickr (Click Here). She also has sets of other Walpurgisnacht festivals at Europa and Caledon. 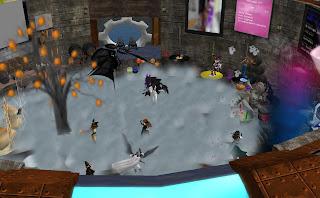 The following night in the Sunweaver Estates, at Club Cutlass the spooky fun continued with Jenni Greenfield holding a "Halloween in May" party. There was nothing really about European festivals. It was six months away from Halloween, and a good excuse to bring out the ghosts and goblins. Jenni herself DJed for the event.

The place was covered with a thick fog, leading to jokes that if someone was gray from lag others were unlikely to notice. There were a number of witches there, including a chakat whom was dancing unusually smooth for a taur avatar. A mermaid swung on one of the dance poles. And a vampire bat hovered around for a while until coming down to dance with one dark lioness.

No one was hexed, haunted, bit on the neck, or otherwise inconvenienced that night.