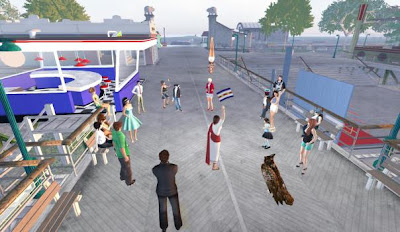 Daniel Voyager was on the scene when Bay City had an unusual guest: The head of Linden Lab Rod Humble, also known as Rodvik Linden.

Rodvik Humble who is CEO of Linden Lab today came inworld for about half an hour to hang out with SL residents in the Weston region in Bay City. A large crowd formed around Rodvik within minutes and had a interesting discussion. The reason that Rodvik Humble came inworld will be revealed soon. Wooooot!!!!

Bay City wasn't the only place Rodvik stopped by. Jo Yardley of the 1920s Berlin Project documented his dropping over there as well. 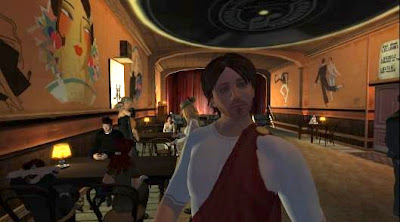 I had invited Herr Humble for a free tour of the sim a while back and was told he would be dropping in today. It was great to finally meet his avatar in person. The welcoming community of 1920s Berlin was very excited to have him as a guest and we all hope his avatar will come more often.

Rodvik Linden is not known to visit the Grid often, at least not recently. Earlier in 2011 not long after becoming CEO, he did make an effort in "getting immersed in Second Life" and he did make an appearance at SL8B. Since then however, Rod hadn't been noticed. Do these visits mean the head of the Lab will take the time to visit inworld more often. Time will tell.