If there's one thing that bugs each resident almost constantly, it's the ever-present lag. Sometimes it seems worse than usual. Those of us with longer memories may wonder, "Is the lag really worse than usual, or is it just me?" So when a few others also complain, well, you figure you may be right. 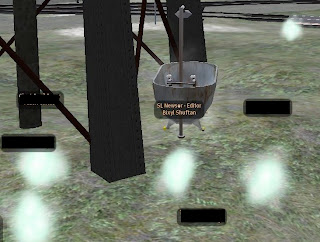 But if person after person complains, saying they've had to stop using a new viewer for an older one, well, you may be pardoned for wondering if there's something rotten in Ahern.

So what's behind the lag behind these complains? Some I chat with blame the more recent updates to the viewer. And indeed the most recent update to the official Linden Lab viewer frequently causes things to freeze or even crash whenever I Instant-Message someone, or get an IM from someone. Others complain about their Firestorm viewers, going back to the old Phoenix, even if it's no longer supported by the team. One person compared it to going back to a worn and ragged but comfortable pair of old shoes when the new shoes kept pinching your feet.

For myself, Firestorm doesn't work on my computer, and except for the first release or two never has. The bugs I found in the official viewer meant going back to full time use of Cool VL, but the version I use is some months old, and at times such as a crowded sim can show its age. For some peculiar reason, their more recent Mac viewers won't work for me. Then a friend and I were talking about the Singularity Viewer. Mentioning I stopped using it when it stopped updating their Mac client, she told me they had started doing so again and the most recent update was just a few weeks ago. So I gave it a try, and it worked!

Well, not perfectly. Things still take a while to load. But it did put a stop the the occasional "invisible jacket" Cool VL sometimes game me. Then again, maybe the lag seeming so bad is just my imagination.