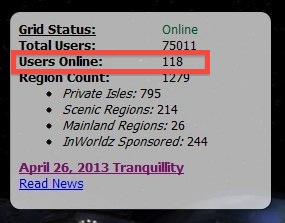 In a recent article by Daniel Voyager, he stated the Opensim grid of Inworldz had reached 75,000 users. That certainly sounds impressive. But a look at the screenshot showed one small problem, only a little more than a hundred people were on the whole virtual world. That's about the size of a few packed sims in Second Life. Daniel would state in the comments that he logged in late at night. Still, even if night activity is a small fraction of peak daytime activity, this suggests Inworldz's milestone isn't telling the whole picture.

Opensim worlds have a tiny but sometimes vocal user base, whom on occasion promote their worlds as the real future of virtual reality, eventually replacing Second Life. There's no doubt they have accomplished much. The same screenshot shows a very impressive startship build. But does their performance live up to these claims? While these worlds allow people not to deal with Linden Lab, their populations remain small, the choice in avatars remains limited, and people I've talked to have told me lag, as bad as it is in Second Life, is worse on the Opensim worlds.

Minethere Always pointed out an article on Hypergrid Business last month, written by Maria Korolov, in which "the top 40 Grids reported a total of 17,591 active users, a drop of 470 compared to the last month." Most of the decline was in one grid, but it's still a big hole in the wilder claims of the Opensim advocates.

So how many use Inworldz? Maria stated it's number of active users was 6,325 users. Impressive for an Opensim world, Avination having 1,838, only three others having active users over a thousand, and even half the top ten had just hundred at best. But no comparison to Second Life.

Bigger isn't necessarily better. Another commenter on Daniel's post responded she'd rather deal with "118 users that know why they are inworld" than the Facebook crowd. But a peek behind the milestone of Opensim's top grid suggests Second Life's position as the undisputed top virtual world, with numbers exceeding some top MMO games such as Eve Online, is pretty secure.