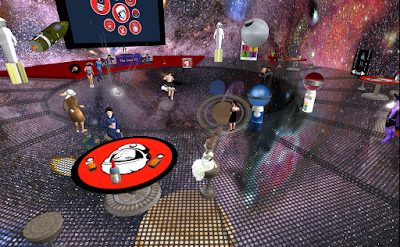 On Saturday, April 11, the National Space Society celebrated "Yuri's Night." The event, named after the first man in space, Yuri Gagarin, is to celebrate milestones in manned space flight. The party was high above the Spaceport Bravo sim.

There were a mix of early 60s tunes, and space themed songs such as "Walking on the Moon," "Goodbye Cruel World," "Space Girls," and others. People either danced, or floated in the air, often in spacesuits.

There were a few topics, such as the Coronovirus Crisis, which may have caused one NSS member to skip the event, and some sadness over the lack of progress in manned space travel in recent years.

On another note, it was fifty years ago that the accident that crippled Apollo 13 and almost caused the loss of all aboard took place. It took a good deal of effort by both the astronauts and the ground crew to get the crew back to Earth in what would be called a "successful failure."