From Wednesday April 8 to Sunday April 19, the Relay Rockers hosted a multi-team "Bid Me Bald" event at Arinultra Cay. Finally on the last day at 4PM, the final totals were tallied. 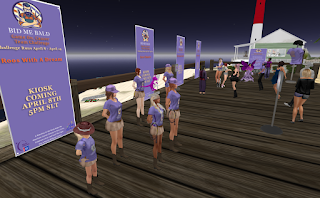 As Arizona Ballinger put it, "Woooot! Awesome 'Bid Me Bald Challenge' ending .... Total L $152,394." "Congrats Relay for Christ," Sienna Thor would add for the team that got the highest total. 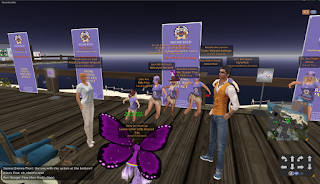 The captain of Team Wishing Star was not around.  Arizona would say, "Team Wishing Star will be bald until June 6, 10am slt. Unfortunately she could not be here today due to illness. We will cut her hair on return." But not wanting to disappoint those who came for a haircut and shave, she took her place in the barber chair, with the team captain of Relay for Christ handed the scissors. One remarked, "Can Leelee be trusted with scissors? Or are we all in danger?" "Just hair, Leelee. no ears eyes or noses!" But Arizona took it in stride, "I never had a mermaid cut my hair before."

After the fact, as Arizona would say in group chat, "I stood in and Leelee cut my hair!  No band aids needed!" Nuala Maracas would comment, "Having a little mermaid floating around with scissors and doing a hair cut, it was touch and go on the band aids for a bit (laughter)."

While the multi-team Bid Me Bald is over, the Relay Rockers have another event soon, the Relaystock. This is another multiple team event, including Team Sunbeamers, that's a salute to the three day music festival in 1969.