Veterans Isle Thanks It's Friends 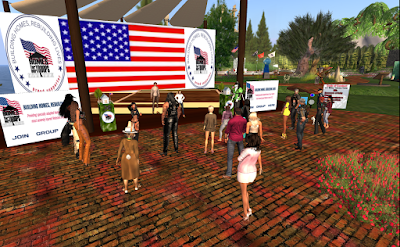 The benefit concert on Sunday March 29 at Veterans Isle for the Homes For Our Troops charity was a success with 186,350 Linden dollars raised. A week later on April 5 at Noon SL time, they asked various friends and supporters over the past year to come by. There were some questions such as how much of the money raised goes to overhead (less than ten percent, over 90% of the money raised by HFOT is used for homes). One question led to it being stated that Linden Lab occasionally demands documentation by the people representing Homes For Our Troops in Second Life.

But the main purpose of the meeting was for Frets Nirvana, the people at Veterans Isle, and two people from Homes For Our Troops, Mike and Jamie Crossman, to thank their friends and supporters for their help, "You are special to this effort and we value your support.  Thank you for all you do."