The Fairelands Quest is Active 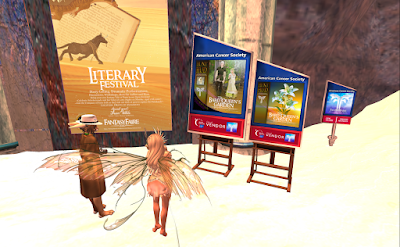 One of the attractions of the Fantasy Faire, "The Fairelands Quest," is now up and running. In this game, you'll be taken on an adventure, and get some prizes along the way. Complete it, and you'll get a lot of prizes. In the past, the Quest has been delayed a few days as bugs were worked out. But this year the first part came on schedule. This year, the quest is "The Bard Queen's Garden." The Bard Queen asks some fae to get seeds for her garden. Unfortunately, the fae get distracted. So the Queen has to call on an adventurer for help. 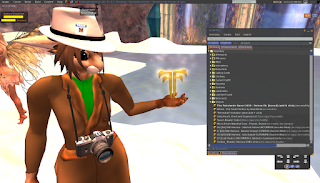 To play the game, you'll need the required HUDs. They can be found at kiosks near the sim landing points, in the case of Fairelands Junction at (110/61/47). To get just the basic game, put 250L in the smaller kiosks. For the deluxe version of the quest, pay 350L in the larger one, which will give you the HUDs, and a Medieval fantasy-themed "Friend of the Fairelands" outfit. Once you buy the game, just find the boxed item in your inventory, add it to your avatar, then click on it. It will then unbox into your inventory. If you want to wear the outfit, you'll have to go somewhere else and unpack it. I found that my DSD Rabbit avatar I was wearing at the time was partially showing through the chest area. So I had to make a new (prim) shirt and made it close to the right color.

To begin the quest, while in the Fantasy Faire area, add the quest HUD, then attach the almanac HUD. You'll need to find the Bard Queen somewhere in Fairelands Junction. Presumably, she'll send you to get the seeds she needs (I haven't found her yet despite searching around the sim for fifteen minutes and got called away). So what are a bunch of seeds going to do against her enemy the Unweaver? Presumably adventurers will start to get their answers tomorrow Thursday April 30 when the second part of the quest opens.