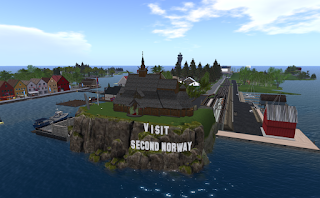 About two weeks ago, word started getting around that the Second Norway sims, located at the eastern part of the Blake Sea, were in trouble. Soon after at the VWBPE conference, Patch Linden stated that Linden Lab was in talks with owner Ey Ren, and was confident of a good outcome. Since then, starting on April 2, Ey began posting updates of the situation on his "Bald Elf Blog."

For those in Second Norway, Ey has stated no one there has to pay tier "until further notice. ... No regions will be taken offline without prior notice in due time. Tier payments will however be a matter between tenants and the new owner once region ownership has changed. I will research how to fund regions not changing ownership. Eventually, I will start removing regions which I am unable to keep or get new owners/sponsors for. All removals will be announced well before they happen."

For another estate of sims to the south, Sailors Cove, Ey announced that 24 of the 45 sims were being handed over to Patrick Leavitt. Of the sims left, four would be taken down, "This is to avoid entanglement with Patrick's regions and allow for eventual expansion."

A lot of infrastructure and rental equipment will have to be replaced and change hands over the next couple of weeks as we help Patrick and his estate managers get in control over the areas. Tenants will be contacted and given info on how to proceed under new ownership.