Uccello Poultry Has Died of Coronavirus 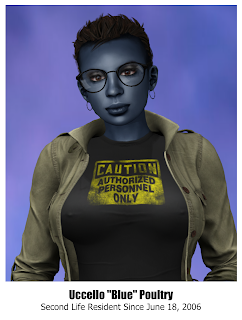 Many longtime Second Life residents knew Uccello Poultry as one of Bay City's more noteable residents, as well as the writer behind the "Poultry Report" blog. After over a year of inactivity, her real-life brother CC Columbo posted that she had passed away from Coronavirus, and was delivering her final message. "Caitlin wrote several letters before she passed," He would say of Uccello, "One was for her friends and family in Second Life. Here it is."

In the post aptly named "Logging Out," Uccello would credit her brother with saving her life, though the experience came "at the cost of me being able to speak and an inability to cope with a number of instantly blooming phobias." Such phobias would lead her psychiatrist to recommend Second Life as a way to overcome her fears and socialize. After a time on the Teen Grid, she would start an account on the main one along with her brother who "met me at Waterhead and took me to his land in Nangrim. There he gave me $L100, 16 square meters of land to call my own, and then took me to the Isle of Lesbos. The rest, as the trite say, is history."

At Lesbos I met my soon-to-be sister, Threshin. She helped me become a strong (if willful) and confident woman over the subsequent years. Always encouraging and loving, I learned that I didn’t need to cling to my brother. I also met my wife, Angela, there. Marriages in SL are real, if you let them be so.

I’m also proud to say I was a citizen of Bay City, the BEST community in Second Life. So many close friends, especially Marianne, Pygar, Rachel, Roc, and the eternal Ever Dreamscape. This was truly the life I did not have growing up. And grow up I did. The strength I gained from being accepted into the city and becoming a contributor (the year I was Miss Bay City was the best year in any of my lives) led to me becoming a productive citizen in Real Life. Getting a job, paying taxes, and becoming responsible for others. Just like a real person!

Uccello would cut ties to Second Life when she was concerned she was addicted. And then came the Coronavirus, "Most likely it was from someone at work that CC, his girlfriend, I picked up the COVID-19 virus (along with who knows how many others), learning of this only after we were told to stay home (with pay!) and to wash our hands. Fever, cough, no sense of taste or smell … I was tested. A few days later I’m here in the hospital with an iPad and a teddy bear and I don’t think this is going to be good."

Her last wishes were that her friends help her brother cope with her loss, and ...

/me hands you an impossibly large box.

Take my Love. I have plenty for all of you. Perhaps I’ll see you all on the Big Grid and we can swap stories. I hear there’s no Grid goo and the Feed there works. Until then, there’s so much I haven’t done. Go out and do it for me.

And so, the epidemic that has claimed so many lives in both the world and America has taken one of Second Life's noted residents and a beloved Bay City personality.

Posted by Bixyl Shuftan at 4:00 PM