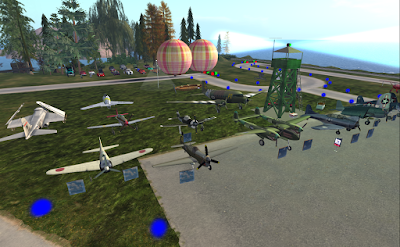 This weekend, the Sunbeamers had their Seventh Annual Air Show at Farshore Field. As before, Cynthia Farshore worked hard to get the event set up. There was the cannon to the Moon. There was the dunking stool with the German 88 cannon. There was Skylark Lefavre's balloon ride. There was the pirate town set up nearby by Arcadia Asylum's Prof. Grey. There was the airfield which people could rez planes and take off. And there was Cynthia's display of WW2 aircraft, with a few from times before and after. 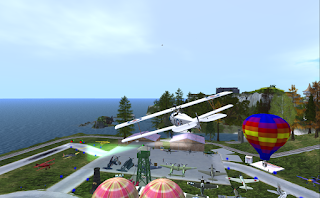 A number of people showed up. Yours truly rezzed a Nieuport 17 and flew around. And when I was needed elsewhere, when there was more activity I sent an alt over whom managed to send someone into the dunk tank. But while a number from Team Sunbeamers showed up, besides Gem Sunkiller and someone from Meli's Maniacs, not many from outside the team did. That dispirited a few, which showed in team captain Rita Mariner's announcement

Sunnies and Beamers:  I wish to give my deep heart felt thank you to those of you who could find the time and made the effort to attend Cynthia's 7th Annual Airshow.  She puts a lot of effort into these and the least we can do is support her to the best of our ability!  So few non-team members showed up to support it, it was truly sad.  I know our team makes every effort to support other teams, It would be nice if they did the same.  Sadly it seems, that is not the case. I still want us to help others. 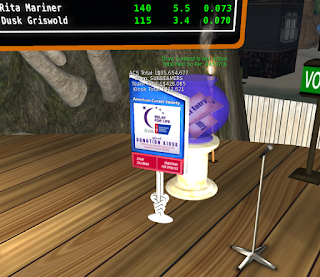 It wasn't the amount of cash raised that was the issue. It was brought up that some traditional heavy-hitters that outperform the Sunbeamers in Linden dollars raised have been lagging behind this season. Among almost 180 teams this year, the Sunbeamers have consistently remained near the top. And in a year in which many people's incomes are gone due to the Coronavirus epidemic, the team is happy to raise the amount it has. The issue was the number of people from outside the team showing up, which had some members scratching their heads. At least one person contacted me saying she would have come over, but had a bad night and slept most of the day, waking up only when it was over.

In any event, enough people donated to bring the team total past 400,000 as the air show was ending. And with Cynthia and Shockwave Yareach's "Bid Me" events and Skylark's bachelorette auction, the total continued to climb to over 428,000 Linden dollars, closing in on half a million and Jade level. One person volunteered to go green for a week for when that happens, either clothes, avatar appearance, or both.

Cynthia is to be congratulated for her hard work, this year and previous years. As for the near future, there's taking part in the Relaystock. And after everyone enjoys the Fantasy Faire, there's the setting up the campsites for the Relay track. And then the Relay Weekend in early June.