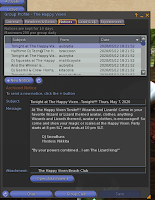 If there's something funny with your group notices, you're not alone. After a friend messaged me saying she couldn't find a post made the night before, taking a look I saw they were all of the same time down to the second. Other people were telling me the same. Checking an alt, the issue was on that account as well.

Taking a look at the Second Life Status Report, the Lab acknowledged something was wrong.

Taking a look at the JIRA, the person who filed was saying the issue wasn't on all server channels. As of the writing of this article, the issue is still unresolved.