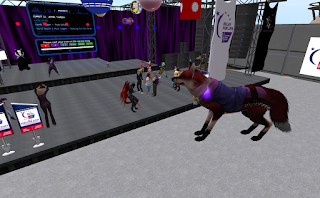 The weekend of May 8-10 was very much a successful one for Team Sunbeamers. On Friday May 8, the day DJ Matt was playing at the Fantasy Faire, an anonymous donor donated a huge amount of Lindens, sending the team past the half million mark, or Jade fundraising level.

Saturday was the day of the multi-team event at Meli's Maniac's Club Amarantha. The Bring Your Own Kiosk event was a fantastic success for the Maniacs, with over 80,000 Lindens brought in. At one point, they pulled their kiosk down so the other teams there would get more cash. By Monday, their team total would cross the 100K mark to 102,000 Lindens. The Sunbeamers would make a little over 10,000 L at the party.

On Saturday night, the results of Shockwave Yareach and Cyanthia's two "Bid Me" events were totaled at Club Cutlass. It had been expected they would be having a change of appearances for a few weeks, but like with Nydia's event a few weeks ago, there was a last minute surprise. Enough money had been donated in their "stay" kiosks to keep them as is. 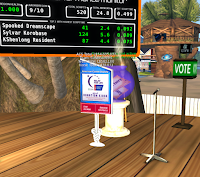 Talking to Cynthia, she was a little worried if some people were disappointed at the results, expecting a change. But Rita was happy, saying the team had gotten almost 48,000 Lindens as a result.

As of now, the Sunbeamers have raised 582,100 Linden dollars. And the team still has much to do. There's a special event by the Sunbeamers this Friday at a special location, plus a "Moon Dance" at Sunlight Bay a week from now on Tuesday May 19. Both events are Bring Your Own Kiosk. The team is confident of reaching Sapphire rank, 750,000 Linden dollars soon.