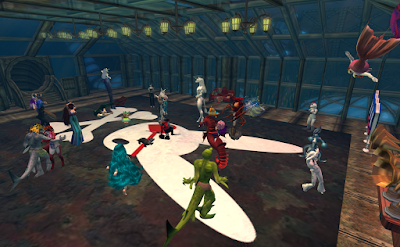 Friday May 15 saw the Sunbeamer's "Under the Sea" event at the "Aquarium" venue made for special events such as this. A number of people showed up for the party, music played by DJ Snowbuns, including a number outside the team. As it was a multiteam event, two others showed up, Meli's Maniacs and Soul Sisters n Family, whom got over 5000 Lindens each at the fundraiser. The Sunbeamers got much more, getting the team total past 600,000 Linden dollars.

As of the writing of this article, the team has raised over 607,00 Linden dollars. The Sunbeamers will also be having their "Moon Dance" event tonight, and plan to take part in a multi-team club crawl this weekend. 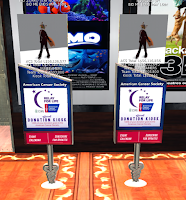 Also, on Saturday May 16, the results of what will probably be the last of the "Bid Me" events were announced by Rita Mariner. The volunteer, Zorro Wuramunga, will be quiet for a while.

Zorro goes MUTE for 4 WEEKS, till, JUNE 13th.  This MUTE apples to OPEN CHAT Only, He may still IM, if he wishes. Such as making a musical request.

"What does the fox say?" In Zorro's case, nothing for a month.