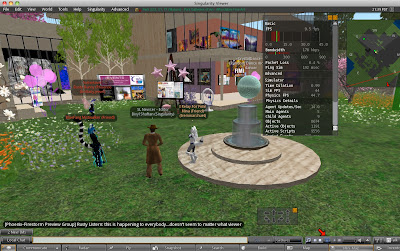 And back. I never expected a storm other than a hurricane to make such a mess.

The weather forecast that day was "Thunderstorms." What happened was 20 minutes of 60-70 mile an hour winds. Trees and power lines fell. Quarter-sized hailstones pelted some places. 170,000 lost power. One man was killed.

Ended up spending a couple nights without power. It finally came back at 5PM SL time yesterday. Just in time for an event (which I'll write later about). In the meantime, I had been planning to take the computer to the Apple place. Fortunetly the place did have power, so I was able to have the OS updated. The result for SL? Well, Viewer 2 *still* won't run. But one a friend kept telling me about, Singularity, does. So far it looks good, but I still have yet to take it to a crowded sim or a dogfight in New Fallout.

With a few days out of the picture, some things aren't going to get the look-over they would have, but at least I'm back in the news business.