Relay For Life "Bid Me Human" 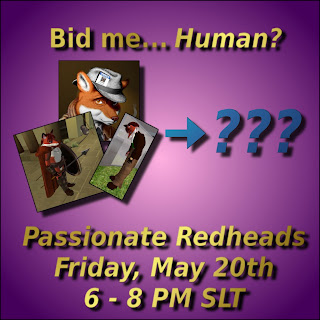 It was a couple years ago in which Daaneth Kivioq voulenteered for a "Bid Me Furry" event for the Passionate Redheads in which he offered to join the ranks of the furballs if people donated enough. 10,000 Lindens were raised, and he took on the look of a feline for a little while. Also about that time, another group did a "Bid Me Human" event in which a kitty offered to shed his fur coat and go human. Not as much was raised, though the girls at the event donated enough cash to make him furless.

With the Redheads needing a little more help after their recent troubles, I brought this up to some officers, and they liked the idea. Since it was my idea, well, guess it was only fair to volunteer.

Yep, that's right. "Fox News" is offering to be not so foxy for a little while.