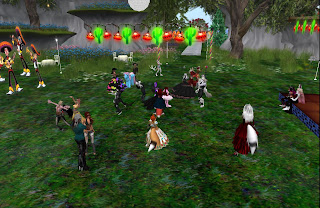 On Thursday May 5th, the Passionate Redheads held a dance party in Southern Colorado. As it was the Mexican-American holiday Cinco de Mayo, that was the theme of the party. Beginning at 5PM Second Lite time at the Enchanted Forrest, team officer and DJ Dusk Griswold cranked up the tunes with a selection of mariachi music. There were a few decorations setup, including a band wearing sombreros and a green liquor glass next to limes and a salt shaker.

A number of Redheads showed up, the total number showing up probably close to three dozen. The sim had a diverse crowd too, a mix of furred folk and normal human avs. Builder Lomgren Smalls and club owner Nydia Tungsten were among those attending. Not long after 5, someone else showed up: Daaneth Kivioq. His first event since returning from the hospital, he greeted everyone in voice, and the crowd greeted him warmly with a mix of voice and text, “Welcome back Daan.” He didn’t have a problem reading, as once feared, but couldn’t respond with type of his own. 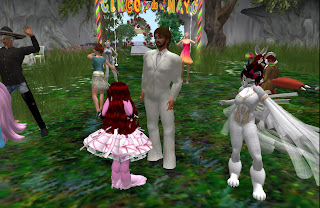 At one point, Daaneth crashed. He soon got back on, but was ruthed! Going into “Appearance” didn’t help, nor did relogging. Amused, the girls in the crowd began kidding him about his ruth shape with bosom jokes and “boobies!” gestures. Finally, Daan changed to his feline av from the “Bid Me Furry” event a couple years ago. It worked, though changing back to human his skin remained gray for a while. Someone joked it took time for the fur to shed.

During the event, some special news was announced. The total amount of cash raised by the Relay for Life in Second Life since it’s beginning had reached one million US dollars. The news flash was greeted with cheers.

The event officially ended at 7 SL time, and Dusk had to leave. So Nydia invited those remaining to the Little Dove zeppelin club flying over the sim. There, they danced and joked for a while until they had to retire for the night.