"The SL Grid is Turning Purple!"

From May 7 to May 13 the Second Life grid will be turning purple! 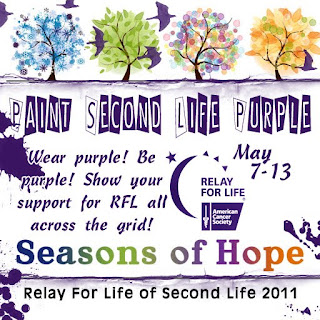 Thousands of Second Life residents will be painting their stores and houses purple, wearing purple clothes, purple hair, even purple skin, in order to show their support for the Relay For Life of Second Life and to spread a purple Message of Hope.

Relay For Life® is the signature fundraiser of the American Cancer Society. Relay For Life of Second Life (RFL of SL) is an annual activity that takes place in Second Life® in July each year. Volunteers form or join teams to have fun while fundraising and raising awareness from mid-March through mid-July. In July teams build campsites and walk a track, just like in a real world Relay.

‘The rest is history ... in 2009 ‘Paint SL Purple’ was developed and introduced to the Second Life community as a one-day event.

‘But, given the creativity and wonderful things that can be done in Second Life, we came to realize that one day was not enough and that it was over too quickly. In 2010 we extended the event to a full week.

‘We’re keeping the tradition going in 2011 with another week filled with Purple Pride from May 7 to May 13 to show Second Life what we Relay for!’ 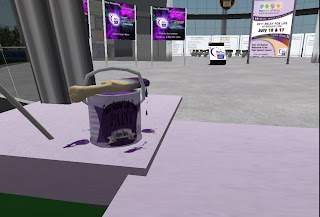 ‘Paint SL Purple’ week culminates in the halfway point between the start of fundraising and the main Relay event.

After nearly two months of fundraising, and with another two months to go, 2011 Event Chair MamaP Beerbaum reports that SL relayers have already raised an awesome US$125,650 -- over half the total amount raised last year!

To mark the halfway point there will be a Halfway There Fair on May 14-15 where relayers can relax and celebrate before embarking on another two months of fundraising, culminating in Relay weekend on July 16-17.

All Second Life residents are invited to show their support for Relay For Life by turning their space or their avatar purple on May 7. Contact Bailey Dazy in world for a ‘Paint SL Purple’ toolkit or grab a pot of purple paint from the American Cancer Society island -- (http://slurl.com/secondlife/American%20Cancer%20Society/126/55/22)

Poppy Zabelin, Relay For Life of Second Life PR and Marketing Chair, added: ‘Help us document this event by sending your pictures to our Photography Chair IshtarAngel Micheline (ishtarskiss@gmail.com) or upload them directly to our Flickr stream www.flickr.com/photos/ishtarskiss/.’
Posted by Bixyl Shuftan at 6:00 AM