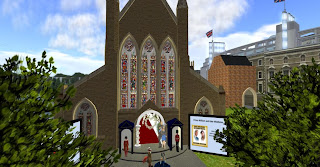 The RL wedding of Prince William and Kate Middleton took place Friday at Westminster Abbey. Here in SL, our British friends are celebrating the wedding at St. Mary's Abbot, located at KENSINGTON W8, Kensington W8 Lon, Kensington W8 London (73, 240, 21). An image of the happy couple, who are now known as the Duke and Duchess of Cambridge, is positioned in front of the SL church.

The site has lots of information about all of the Royals, including Prince Charles, the late Princess Diana, and William’s grandmother, the Queen. Even more interesting to me were the links to the official UK websites. One link has everything you would want to know about the wedding, including video highlights in case you want to watch it again. Another site tells about the palaces and shows their locations, and the link at the rear of the church tells about the Crown Jewels, which are the crowns and other ceremonial objects worn by their royalty throughout England's history. 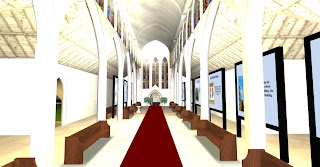 As you probably know, both The Duke and Duchess were born in 1982. They met at the University of St. Andrews in 2001. William is second in line to be King of England. He is in the Royal Air Force, co-piloting Sea King search and rescue helicopters.

After you’ve looked at the wedding info, you can explore the area around church. Just outside, past the guards, is a carriage where you can pose for pictures with your friends. Then you can take a walking tour of London, maybe even catch a concert by the Queen tribute band. This is a fun sim, with lots of free items to take home as souvenirs, too. 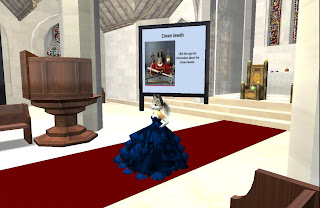 The official web site states that the Duke and Duchess delayed having an official honeymoon and instead spent a quiet weekend in the UK. The rumor is that they are honeymooning in SL.