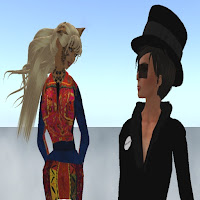 Checking out Daniel Voyager's Blog, a couple days ago he got a Twitter message from Explorer Dastardly, whom forwarded a message apparently from Yoko Ono:

Yoko Ono: You have been ejected from 'IMAGINEPEACE.com' by Yoko Ono.

The Imagine Peace Tower in Second Life was opened in October 9 2009, just after the yearly lighting of the one in real life it was based on. It would light up just after dusk on the sim and shut off at dawn every day.

No reason was given for the sim's closing.