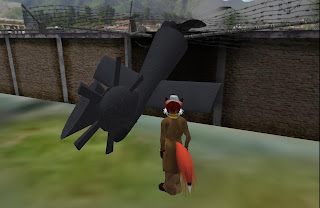 Recently, I heard of a re-creation of Osama Bin-Laden’s hideout, known to locals as the Wazirstan Haveli (mansion), here in Second Life. Built by the Avitarian development team, “to the proper scale and orientation of the RL compound in Abbottabad, Pakistan.” It was considered largely complete after five days, but “still an on-going work.” Google Earth maps were used in planning the build, in addition to TV footage. 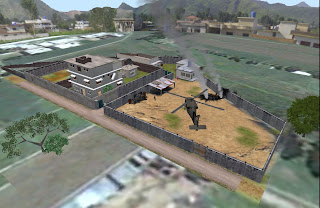 Although the insides are unfinished, the building exteriors, grounds, and walls are well-detailed. The walkway from the main entrance nearly splits the compound in two, the residential building on the left side of the gate. On the right, a helicopter sits inside the compound, the wreckage of another next to the wall with the tail rotor hanging outside. Smaller buildings hold the satellite dish and water tower. The high outer walls are topped with barbed wire. Around the compound lies a wraparound picture of nearby Abbotabad, with the stream playing Arabic music to add to the atmosphere.

Founded by Chenin Anabuki, Avatarian plans to continue to improve the build over time, and film Second Life movies there. The compound is open to the public, but keep in mind the Avatarians can drop in at any moment to recreate a raid, “We prefer avatars with kevlar vests and camo pants as bullets tend to fly around the area. Visit at your own risk!”

More pictures can be found at Avatarian’s Flickr page, and they’ve released one film.

“This film ... demonstrates rapid-development capabilities in the Second Life platform and only shows a loose re-enactment of the SEAL raid operation on the compound. It is not meant to portray actual events. ... It is very important to point out though that whenever we produce a machinima, we are always faced with the classic project triangle of fast, good, and cheap. We can only pick two out of three. In the case of this particular machinima, we opted for fast and cheap because it is an internally funded project."

According to news bulletins, Pakistan plans to eventually level the compound. So virtual recreations such as this one may be the only way to visit it in the future.