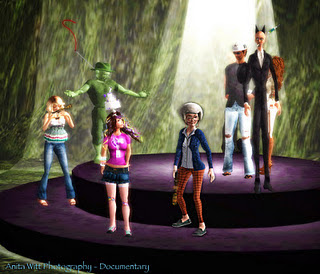 For a few months each Monday at 4SL time on the LEA3 sim, the “Avatar Games” have been taking place, with it’s surreal obstacle course and lively play-by-play from commentators Honour McMillan and Crap Mariner. Next week, the games occur on Sunday, for their season finale.

Bryn Oh, the “Platform Bastard” and builder of the obstacle course, was unsure if the games would go on, “the LEA group has to decide if they want to use the sim for the games or to create something new. Also I would have to make a new course which is kind of time consuming.” Bryn thanked Galea Yates and Taralyn Gravois for helping to organize the contestants, Sasun Steinbeck for helping out with the scripts, and Crap Mariner and Honour McMillan “for very entertaining commentary which had the audience laughing much of the time. They were a funny combo.”

Bryn gave a list of the fastest runners, “Some of them were just fast, while others were fortunate enough to be shot in the air then shot in the arse propelling them almost to the finish line.” ZoZo Raven was listed as the fastest runner at one minute and six seconds. Of the worst runners, Bryn commented, “They were often the most outlandishly dressed and fun ones.” Accord Carling took the longest to complete the course at twelve minutes, fifty-nine seconds.

Bryn had yet to decide on a prize for this final game, open to any donations. She also suggested if it was okay with the contestants, there would likely be a private party to celebrate the end of a successful season.