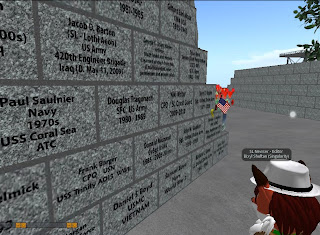 Among the names at the Memorial Wall at the Second Life Veterans Tribute last week, there was one of a Second Life resident Lothi Aeon, whom in real life was Army Specialist Jacob D. Borton.

Lohti Aeon’s profile description didn’t have much. A few groups, a picture of his virtual self, a single location. A man of few words, his 1st life tab simply stated, “I'm a 19-year-old soldier who spends his spare time on his computer, after balancing out school, family crises, work, and other mumbo-jumbo.”

In real life, he was Specialist Jacob D. Borton of the US Army. Described as a “shy video gamer” in his high school years, he joined the Army and was sent to Iraq. He was described as reserved, but not afraid to come to the aid of someone he felt was being pushed around, “He wouldn’t say much unless there was some injustice being done, and then he would speak up.”

Borton met his end not at the hands of Islamofacist terrorists or their booby traps, but by one of his own comrades. He was one of the five soldiers killed at the combat stress clinic at Camp Liberty on May 11, 2009 by a sergeant sent there whom left the building and returned with a gun. Borton is described as putting himself between the shooter and another man, trying to talk the assailant into putting his gun down. He was 20 years old.

Then, he was placed on another Memorial Wall on the Grid. Later on, he would be placed here as well to be remembered.