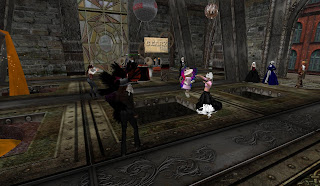 A few days ago, Steelhead had a seemingly unlikely event for a Steampunk-themed region: a "Sock Hop."

The event took place at Club Gearz. The place was hardly a typical club, looking much like a steel foundry. The dance floor was not wood, but cast iron. The walls, made out of masonary brick. And next to the dancers was the glow of molten steel as it poured from containers into holes in the ground: the ultimate "lava lamp." 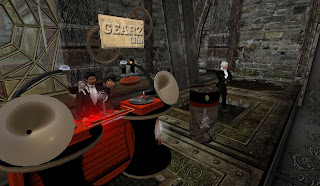 Sheriff Fuzzball Ortega took part as the DJ, "DJ Fuzzball," with various residents showing up. Someone must have cracked a "sock monkey" joke, and it soon took hold. Residents were sporting sock monkeys on their shoulders, or wearing sock monkey costumes. And Fuzzball got into the act by playing monkey themed songs, such as "Donkey Kong" themes and "Code Monkey." 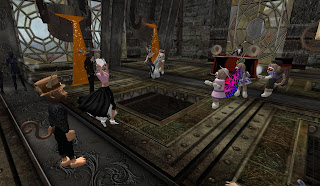 Baron Klaus Wulfenback was among those attending the Sock Hop, but after a while he excused himself, "I seem not to have an ear for these modern songs." But the monkeyshines continued on into the night.

"Steelhead, where business is monkey business."