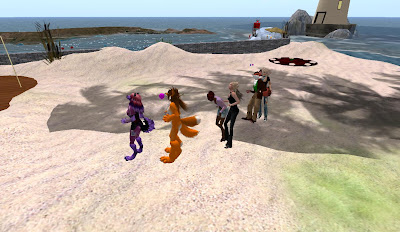 A few of the Second Life Newser staff and their friends were at Cova's Cove the weekend for a small news party. That's Gracie Kendal at the end (who's 1000 Avatar Project just completed it's goal of 2000 pictures), joining us for a conga line dance. Gemma Cleanslate thankfully was able to get online after some days without Internet due to a freak snowstorm.

Covadonga Writer, shown here testing a rowboat for any guest who wanted it, was unable to stay for the party. Hopefully next time.
Posted by Bixyl Shuftan at 6:01 AM