I was told about an open meeting with Andrew and Simon Linden, at 4 SL time. The sign there read that it was about "physics and simulator issues, no whining." 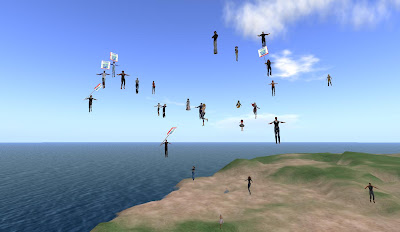 But what got the attention of the person whom sent the aynominous tip were the protestors, "Oh, Em, Gee, it's like Occupy Wall Street." While the person's claim of close to a hundred was inflated, shown here in the sim next door, it was still sizeable. 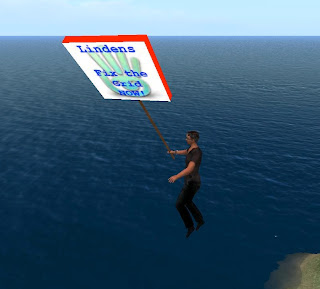 Besides the "No whining" statement, there were also comments the Lindens were only interested in talking to sim owners. This left some others feeling irritable, feeling you didn't need to own a sim to have valid concerns.

*Update* One of those attending wrote a little on the meeting Here.
Posted by Bixyl Shuftan at 7:00 AM