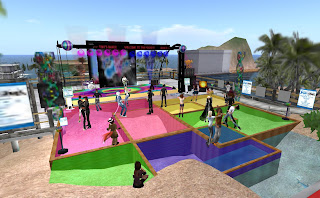 This weekend, the "Jamm for Genes" event raised over 300,000 Lindens. From 10PM Thursday to close to Midnight on Sunday evening, live musicians performed for the Australian charity at three different clubs, one at a time. On late Thursday, "Lacy's Place" in the Sasha sim started the action. Just as the events there began to wind down 22 hours later, at 8PM the musicians at "The Pocket" at Cassandra began playing.

Once owned by Second Life media personality Delinda Dyrssen, the Aussie club "The Pocket" is the most well known of the three clubs. After Delinda's passing, Cellandra Zon took up the reins of running this popular music spot, which normally runs Friday nights and very early Saturday morning. 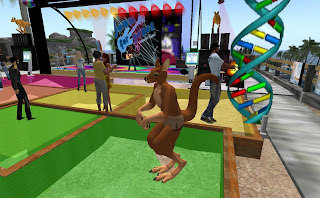 Getting to the Pocket at around 9AM SL time, the dance floor was packed with about two dozen, including musicians such as Beth Odets and OhMy Kidd. Bundy Xue of B&B was also there. On stage was singer Mash Rhode. The off-duty musicians and others in the audience cheered him on, and donations continued to be dropped into the kiosks.

At one point, he was singing a song that got a few chuckles from the audience, "I'm an apeman, I'm an ape apeman, ooh I'm an apeman." One girl sang along, "You be my Tarzan, I'll be your Jane.
I'll keep you sane and you'll keep me warm. And we'll sit in the trees and eat bananas all." 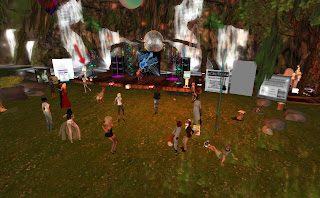 After The Pocket's 24 hours were up, the action went to B&B in Utopia and EnGedi at Midnight Saturday night. The tunes continued throughout Sunday morning and afternoon. Getting there Sunday evening just after 7PM, the party was still very much going with Kat Rose playing her guitar. After her was Bo Carter.

With the musician cheered, there was also some joking around, with suggestions that one guy get on the dance pole, and more funnery.

As of just after 9PM SL time, the total amount raised was over 308,000 Lindens. No doubt more was raised in the next few hours, OhMy Kidd scheduled to be the closing act at 11PM SL time. SL Newser had yet to be informed of the final total. But the Jamm for Genes event in Second Life was an undeniable success.

*Correction* Cellandra later told me The Pocket is actually run by OhMy Kidd and Saraine, "I'm just the Events Manager."