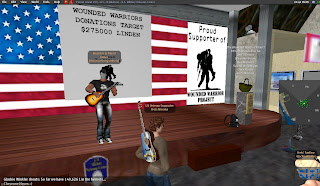 Taking place at the hangar bay stage, the sim was getting a bit packed with 45-50 avatars on it for much of the event. Most were human, but there were a few others, such as one wolfess with a veteran's spouse tag, and another avatar which was just a hat and dozens of butterflies. Among those in the audience was Passionate Redhead leader Sabine McGettin. Besides the fundraiser, the hurricaine in the Gulf made the discussion, "I swear, I did NOT say I needed a guy so bad that they had to send ISAAC to my doorstep, (laughter)." 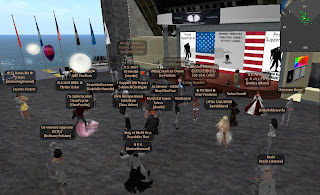 With Acoustic Energy Nitely taking the stage, the donations had passed the 100,0000 mark, and were increasing. Frets Nirvana then began offering to match the donations people put up, "Who wants to break my bank? ... Double your money! Put it in the helmets. Pay it forward, and it will come back to you."

The donations continued to come in after Acoustic stopped playing. At 9:15, Frets Nirvana announced, "157,076 Linden total tonight. Thanks everyone." "Nite Frets, and thank you for being so awesome!"

Patriot Island is owned by the US Military Veterans Group. Besides home to a community of vets and the location of public events, it is in part a memorial site, a replica of the Tomb of Unknowns in the center. So visitors are asked to be respectful while visiting. The Wounded Warrior Project is a nonprofit group devoted to "honor and empower wounded warriors" of the US Military. The Project "began when several individuals took small, inspired actions to help others in need. The resulting objective was to provide tangible support for the severely wounded and help them on the road to healing, both physically and mentally."