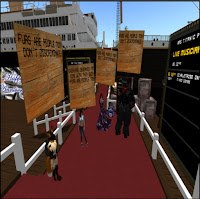 A few years ago, Bixyl Shuftan wrote a much commented-on article about people getting banned from places because of their avatar's appearance. Recently, he was alerted about a protest at the Titanic sim, the protestors saying they were banning furry avatars even though they were following the dress code. But a closer look suggested a somewhat different story.

Read more in People.
Posted by Bixyl Shuftan at 6:05 AM