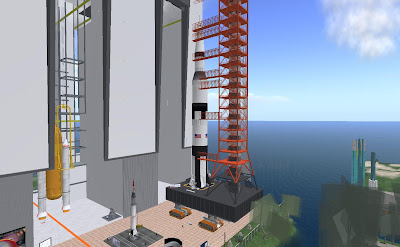 Last weekend came some sad news for space fans. Neil Armstrong, the first man who walked on the Moon, passed away. He was 82 years old.

The news certainly got many, including myself, pondering. It was a reminder of how long ago what some consider our high-water mark in manned space exploration was reached. It also got some wondering "What happened to him?" Unlike some astronauts whom stayed in the spotlight, such as Senator John Glenn, he instead went back to Ohio for a job in teaching and bought some farmland.

When his family was asked how should the rest of us remember him, one answered that the next time we see the moon, think of Neil Armstrong, his fellow astronauts, and the journey they went through.

A few years ago on the forty-year anniversary, there was an exhibit in the Second Life Sci-Lands that allowed residents to do just that. Built by a Wicked Quasimodo, it was never quite finished, and went up once an hour, along with any space fan whom was waiting for a ride. As the sim it was on, Space Frontier, is now gone, what happened to it is still unknown. But in Spaceport Bravo, west of Spaceport Alpha, one can still find this Saturn V Apollo rocket. One can just barely see my five-foot avatar at the bottom near the launch platform treads, showing just how big these massive rockets, and their launch pads, were.