Waiting for "Curiosity" at Explorer Island 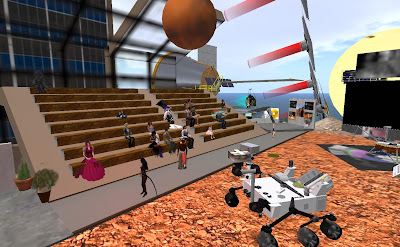 Before logging out for the night on Sunday, August 5, I decided to head to Explorer Island, of which an SURL had been posted at (126, 99, 38). There, I ran into a number of people, including Ariel Loonie (upper left in the stands), and RacerX Gullwing. They were awaiting the landing of the Curiosity Rover on Mars, which took place at 10:32 SL time. Unfortunetly, I was too tired to stick around, so snapped this picture.

Curiosity is the largest rover ever sent to Mars, weighing about a ton in Earth gravity. It's landing was a combination of a parachute descent and being lowered onto the ground by a "skycrane." Unlike other rovers, it's descent was caught on camera from orbit. The rover is essentially a mobile lab, which will analyze soil samples for signs of Martian microbial life, some of which may be a billion years old. It's mission is planned to last for two years, though it may last longer. Spirit and Opportunity, two rovers that landed on the planet in 2004, were on a mission planned to last for only three months. Spirit lasted until March 2011, over six years. Opportunity is still moving and analyzing.