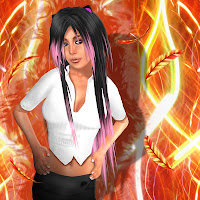 Any1 Gynoid recently pointed out the latest entry on the Phoenix blog by Jessica Lyon. She explained that Pathfinding, the new tools for smarter non-player characters in Second Life, were going to be rolled out on August 7 which "may have an impact on the performance of your regions, as well as introduce some new bugs." Pathfinding would be running on the sims as soon as they were updated.

Jessica wrote that the Lindens assured her that the impact on the sims would be small. But Region owners and mangers could disable it (or re-enable) if they wanted. Or they could optimize it, which could be done by downloading the official Beta Viewer from Linden Lab. Unfortunetly, "along with Pathfinding come changes to the Havok Physics engine, which have introduced some new bugs … including issues with some vehicles, physics, phantom, and sculpts." She had sent a list of questions to the Lab, and got a few answers in response.

Jessica's entry got a number of comments, mostly complaints about Linden Lab. In the official blog, a thread on the subject was started, which was more balanced. One woman there felt the update had gone so smoothly, Jessica hadn't the need to post about it. Others felt there were a few complications.