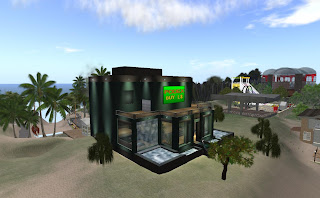 It was a typical day for the Podex bank in late July. The month had been an eventful time for the Podex Exchange. With the Relay for Life earlier in the month, people had bought Lindens to give to the American Cancer Society through their teams. Now with the end of the month nearing, things were more or less back to normal, people coming in to get Lindens for swimsuits and other summer gear. There was a little talk about the upcoming Olympics, and between visits from customers, one teller was talking to the others about going to one of the London areas for the events there.

The talk was soon interrupted by a visitor. He wasn't dressed in much, just shorts and a white shirt with the Olympic Games logo and "London 2012." In his hand, there was a torch that burned brightly. But the one wearing them was clearly recognizable. 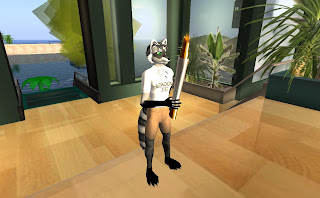 "Clumsy Cooper!" One of the tellers called out, "You got some nerve showing up. And while you're worn some lame disguises before, this doesn't even begin to hide you."

"Who said anything about hiding?" Clumsy asked, "I'm just helping to spread the Olympic spirit, on my way to the London sim." He walked further inside the building.

"Yeah, right! Now you just turn around before we call the cops on you!"

"How about this?" He put the lit end of the torch next to some plants, "Hand over your Lindens, and I won't set fire the place."

The tellers just looked at him for a moment before one spoke again, "I'll have to hand it to you, I never heard of a bank being held up with a torch before."

"I told you, I'll make this place burn!" He had the torch almost touching the leaves of the foilage.

"Go ahead and try. Knowing you, that torch is a freebie that can't light a thing"

"I'll show you!" The bandit then tried igniting the plant. But nothing happened. He then tried the dried leaves under it, still nothing.

"Grrrr …" Irritated, the thief swung it at a nearby machine to try to ignite it. But living up to his name, Clumsy didn't have a firm enough grip on the torch, and it slipped out of his hands. It fell to the ground, and broke in two, the flame fading away. Clumsy looked at the sight in disbelief, "Um … " 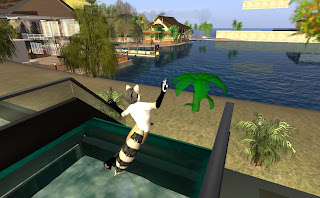 Hearing those words, the masked intruder then bolted from the building, running down the stairs, and down the beach. He ran to some nearby homes and vanished from view. Currently, Clumsy Cooper is wanted by the SLPD on charges of attempted griefing.