The Angels Beach/Sunweavers Make a Place in Minecraft 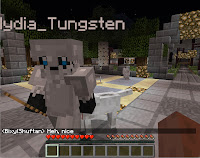 So what have my neighbors in Second Life been up to when not on Second Life? Two years ago, many were going about in World of Warcraft under their own guild, also called "Sunweavers." Today, I haven't been seeing as much activity there lately. So where have they been going? The answer is Minecraft.

Xymbers Slade first looked at the game in April. Myself, it wasn't until more recently when Nydia Tungsten invited me to take a look. She and others from the Sunweaver and Angels Estates had been working away, and eventually I joined up to see for myself what was going on. 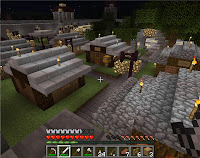 As it turned out, Nydia and the others had built a walled village, named Angels Village, in a private server. Small houses were set up for members who had joined, the beds being where characters would re-rez if they croaked in the game. Crops had been planted to harvest food from, such as pumpkins and sugar cane. And one surprise were the tamed wolves, which helped keep out the monsters that come out at night in the game.

Besides Nydia, Lomgren Smalls helped me out a bit. He was one of the main builders here, working on something when I arrived. Asking if he had gotten used to being the same size as everyone else, Nydia chuckled, "Oh, with the size of the spiders, he jokes we've shrunk down to his level." Both Nydia and Lom had gotten customized skins from http://www.minecraftskins.com/ . I would later get a fox appearance.

Nydia and Lom showed me around a little, such as a mine complex dug beneath the village, and some of the surrounding land. Some useful info was bits like "Do not dig directly below you or above as you never know what might lie beneath or above." There are caverns in the game, and one could fall to one's end. Also, monsters do not always go away at sunup, but zombies can take refuge in the shade of a forest. And while they spawn in darkness, the infamous creepers and walk anywhere. 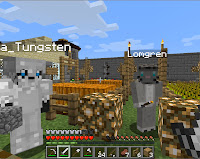 Nydia recommended a few links, such as "How to Survive Your First Night in Minecraft." Another useful link was a page on the Minecraft Wiki for crafting.

Besides the Sunweavers/Angels, other communities in Second Life have been making their mark in Minecraft. Xymbers Slade told me he was exploring around in the Caledon server. And earlier this year, New World Notes did an article earlier this year about one estate owner who found his community's Minecraft server was bringing in new renters.

So far, have spent just a little time at Angels Village, or in Single Player mode to try my luck on my own. Haven't croaked yet, though haven't found any mother lodes of ores either. A real Minecraft adventure will have to wait for a future article. But here is an example of how a community in Second Life made a place in another Grid.

*Correction* Nydia later told me her skin didn't come from a website, but L'sai Aeon made it.