Discussion At Inspiration Island On Talking To Aliens 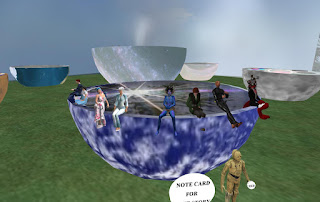 On Sunday August 9, Inspiration Island held an event, "Creating a Galaxy Language," as part of it's "Inspiration Island Appreciation Week." The subject was if we ever made contact with intelligent life outside the planet, how would we talk to them?

Join us to discover the kind of language we will need to communicate with Extraterrestrials if/when we receive a message from outer space or they visit us!

Learning about The Galaxy Language involves exploring the kinds of problem-solving abilities that will help us hold onto the value of life and what we love even in the worst of times.

This is a period in our human history when people on Planet Earth are facing new kinds of life-threatening challenges. This science fiction adventure in a virtual world can give us ideas to try out in real life....besides preparing for a possible ET visit!. 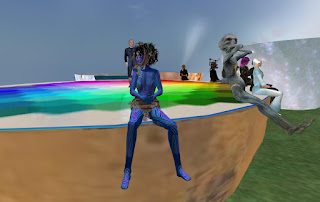 The event was hosted by Wisdomseeker (Lissena Resident), whom came to the event as a blue human-like being. Much of the conversation was in voice, but some was in text. Some of the people wondered if contact already had been established. It was brought up that it might not go like science-fiction as writers may put aside realism in favor of making a story more interesting, plus the more different a character is from human, the more difficult it is to make it relatable and sympathetic to an audience, "Hence all the Star Trek aliens ... are basically humans with bad nose jobs."

On the other hand, science-fiction had some interesting possibilities, such as one episode of "Star Trek," in which the humans had to struggle to communicate with a race whose language was made up of metaphors. Even people on Earth have trouble with metaphors, someone once commenting that in the Bible, "forty" was metaphorical for "a lot," and that today religious fundamentalists not knowing of the metaphor often take the phrase literally. ETs might also have different ways of counting. Humans have a base-ten. Aliens might have base eight, six, or some other number. Other movies mentioned were "Arrival," in which a human translator has to learn how to communicate with a very alien race, and "Contact."

The events for "Appreciation Week" go on to Sunday August 16. To check the schedule, Click Here.