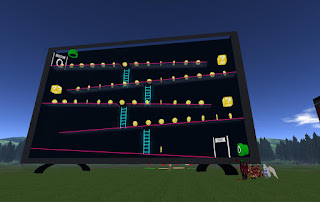 For those of who whom remember the Relay Weekend's build by the Second Life Cheerleading Squad, a tribute to the Donkey Kong arcade game in which you played from a first person perscpective, some good news. Sugar Paw (casio2000 Resident) has been building her own. She had played the one at the SLCS camp, and had been inspired by it to rebuild it.

Talking with Sugar Paw, she told me she had spent "a week on building it and perfecting the physics with the experience script another week. All that is left is the logic of the game like scores and rules." She felt she should have it done in several days, "If I had a full day doing it, I would finish it within 3 days." Of how it works, "most gaming sims now days uses Experience Tools for avatars to experience more of a game feel, like having attachment HUDs and teleports including animating and force windlight without any disturbance during play, gives more of a play then worry of how to and old ways of interacting with objects."

Currently the Donkey Kong tribute is on a skybox in the Ravenlock sim. Once the game is finished, Sugar Paw says it will be moved to the sim's main area, "There will be 10 top scores, the top winner will get a prize once a month." Asking about a name, Sugar Paw told me her friend Meanspirit "wanted to call this game The Poke-Kong." They might go as far as to add a large Pokemon at the top.

Besides the arcade game tribute, Sugar Paw has been working on other things, "Avatar HUD, scripted skin appliers and builders HUD and combat system for up coming Halloween." She had other projects on a "waiting list" for later. She also has her own brand of merchandise: Toxic-X Design. The Ravenlock sim is also known for it's Pokeman games.