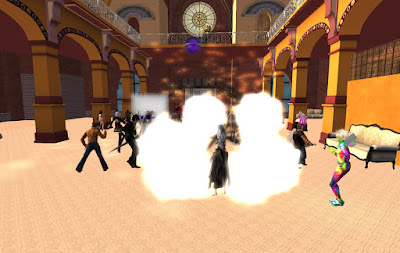 Yesterday, Sunday August 2, was the last day of the Gen Con. The gaming convention that went online due to the Coronavirus ran for four days starting on Thursday July 30. The event has been considered a great success for both those who took part, and for Second Life as well as the event brought a number of people here whom hadn't been here for years or had come here for the first time. Taking in account other places on the Internet, "including Twitch, Discord, Zoom, Roll20, and several other virtual tabletop systems," about forty thousand people took part, and played thousands of games. For those whom were new, there were clothing and avatars available to them to avoid "cookie cutter" appearances.

I was told, though I couldn't find confirmation, that Twitch would be permitting footage of Gen Con events from Second Life, even though the virtual world is on it's list of "prohibited games."

On Saturday night, there was a celebration party. A number of the convention-goers met up at a replica of Indianapolis' Union Station (Gen Con was originally going to be at Indianapolis). The crowd was a mix of longtime residents, such as Ceri Quixote, and newcomers.

Although the events are over, the builds will be around for people to enjoy for a little longer. Tuesday August 4 will be the last day. Some places may require joining one of the con groups to get to. It's unknown whether future conventions will have an online portion for those not able to get to the real-life setting. Though if the mood of this one is any guide, it probably will.