Press Release: Boudicca Amat In A Unique Retrospective In A New Gallery in Bellisseria

Randy Firebrand and Ricco Saenz are inaugurating The 22, a new art space in Bellisseria which will open on August 8th with a unique retrospective of the celebrated photographer Boudicca Amat. The exhibition "5 Times Boudicca" brings 27 Second Life pictures by the artist, organized by themes, in a way that shows both the variation and the consistency of her work since 2014 - and four of those photos are new ones, especially produced for the occasion. The gallery will also display "Carol Anne", an installation by Randy and Ricco in which visitors will go through an experience of enlightenment and extinction, of distance and affection, of ambiguity. 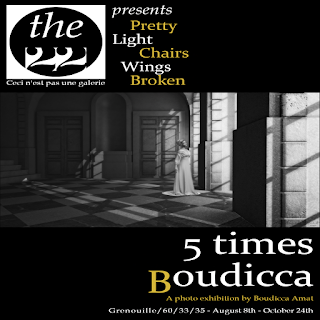 "5 Times Boudicca" is a retrospective, but one with a very particular intent. By concentrating on five themes - "Pretty", "Light", "Chairs", "Wings" and "Broken" - that seem recurrent in Boudicca Amat's repertoire, the exhibition allows us to observe her work along the years and explore different faces of her photography. At the same time, it underlines the artist's consistency: with different subjects, in different years, there is a coherence in the way she treats light (which is one of the themes of the exhibition and also the foundation of the whole project) - and observing that is one of the main objectives of this selection of photos. And, as a bonus, the exhibition brings four new pictures, recently taken by Boudicca. 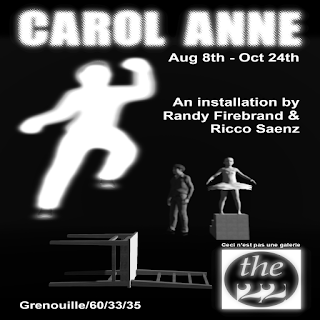 "Carol Anne", by its turn, is an installation about static non-player characters (NPCs) and what happens to them when an avatar, controlled by an actual person, approaches. Ricco and Randy designed it on the premise that the practical consequences of those interactions may lead to other meaningful - maybe more symbolic, maybe more sensitive - dimensions.

Both exhibitions run from August 8th until October 24th. The 22 is located in Bellisseria, at
Posted by Bixyl Shuftan at 6:01 AM