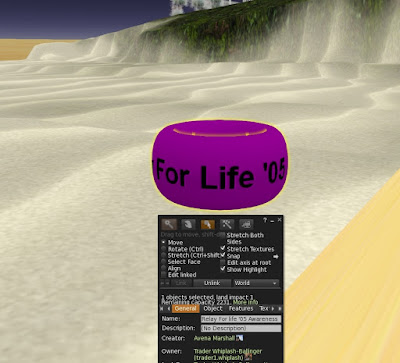 On Thursday August 14, Trader Whiplash-Ballinger (Trader1 Whiplash) was in the process of working on the club and boardwalk at Arinultra Cay, which involved moving both parts of the building and land. In the middle of the work, he made a surprising find. He found a Relay for Life bracelet, one made for it's very first season in 2005.  Overjoyed, he announced it to the Relay group.

Alexia would joke, "Did you find a helicopter under the boardwalk by any chance? I know someone who's been looking for it for years." Trader would go on to invite everyone to the sim at 5PM on Sunday to celebrate fellow Relay Rocker teammate Nuala's real-life birthday, and witness the remainder of the old club blown up.