More On The Mainland Pod Service 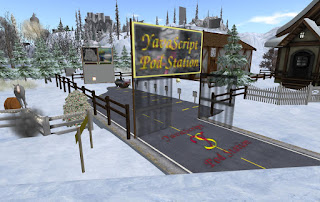 On Friday August 21, Yavanna Llanfair, the creator of the Yavascript pod travel system that covered most of the continents of the mainland, announced she would be "suspending all services" due partially to a 24 hour ban by Linden Lab she had traced to a pod glitch and partly due to the lingering effects of a Coronavirus infection. The service had been going since it's start exactly ten years earlier.

It didn't take long for news to spread. Besides the Newser article, it was also mentioned in Modem World. A thread was started in the official Linden forums. Forsaken Roeth would film a video about the closing and the comments of various people in the pod riders, herself having to hold back tears.

The result has been numerous statements of people expressing their sadness, and some people wondering why the lack of a response by Linden Lab to her ticket. On Saturday, Patch Linden would respond.

I am potentially as confused as everyone else.  But then again I've been out of town this week and I have some catching up to do.  In any case while standing in the house of mouse, this did make it to my attention to look in to.    While I'm digging in to find out what happened there are a few things I can assure everyone of:

These items do not seem like a recipe for a change in policy.  Hopefully things will unfold and we'll get to the bottom of this in a positive manner.  I can't really see any other way forward, and the team and I have no reason to not support or help Yavanna.

Of her account being suspended for 24 hours and the lack of a response to the ticket she filed:

This is where part of my confusion is.  The LDPW and the Moles do not have a real ticket system.  We sometimes receive JIRA's for issues, but that's not really a ticket and the Moles are not reachable directly through the support ticketing system.  While I'm not here to dispute any of this, there also seems to be some real confusion on what or how this happened.  If this took place in July, this is the first I'm becoming aware of it.   There is no "fight city hall" here, again, we have no reason to do anything other than help with the system and the situation.

Ebbe Altberg/Ebbe Linden, the CEO of Linden Lab, would also have a comment. In response to a Tweet by Anne Brightstar, he responded, "No one is stopping them from running."

It should be noted not every single resident is speaking out in favor of the pod car travel system staying. Prokovy Neva would make a detailed post saying it was preferable that the system be closed down, on the grounds all the riderless pods going around were "endless spam," and when going about on roads as half-spheres, they looked like something from "outer space" that didn't fit in with most sims. But most everyone else on the official forums was speaking out in their favor. 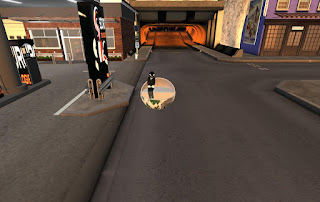 Taking a look at the pod stations this weekend, many of the pod rezzers I checked were still up and running well. One would just click on the sign, jump on the pod (or boat at some stations), and click on the vehicle to get going. But this was not the case of every single one. A few at the Durango (154/188/118) station would vanish about a minute after running. Of the two stations at Bay City, they run differently than the others I found with the railcars and boat already there, and not moving until about a minute after the person or persons get on.

So as of Sunday, the pod tour system is still up and running. The problems are some of the routes are glitched, and of course there's the uncertainly of if the system will still be running. But Patch Linden's comments do hint at a solution soon that should put the minds of the pod car fans at ease. Asadora Summers, a moderator for the Pod Riders group, would say on Saturday, "Things are very much way better than they were yesterday morning ... just believe me that all things will go back to what we know." She would also thank fans for the well-wishes they'd sent Yavanna, and invite others to send her notecards so she could email her the messages. Also, there would be a "Second Life Pod Riders Group" set up on Discord where fans could share pictures and stories.

Addition: Earlier I reported one of the Bay City stations wasn't there and the other didn't work. Another look showed the first was there, the car and boat were just some distance from the LM, and the pods at both do work, they just need some time after the person hops on to get going.

Addition Part Two: I had an alt check a few more routes. While one did glitch soon after starting (probably a sim crossing), most were running fine, including one that glitched earlier.