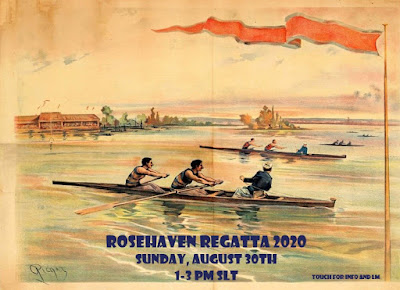 Come enjoy a fun-filled afternoon along the waters of Laudanum in Rosehaven for a proper Regatta!
August 30th, 1-3 pm SLT, at Dragonlight Plaza, Realm of Rosehaven, hosted by Chateau Trikassi.
In addition to the rides, games, food, dancing, there will once again be the Anything that Floats but is NOT a Boat contest.  Prizes will be awarded for creativity.  Rules are simple…the craft cannot be a boat of any kind (ship, submarine, row boat, speedboat, canoe, etc)…but must be a homemade thing-a-ma-jig that floats… sailing and steering scripts are allowed in order to parade on the water.
It wouldn’t be a Regatta without crew racing!  Beginning this year, the Rosehaven Regatta will feature the Race for the Golden Oars!

Each team is comprised of two people (team must be from same region).  Should a community or estate initially sign up with several teams, heat races will be held during the week of August 24th through 28th, to determine their one team competing at the Regatta. Scull boats will be available for practice at Dragonlight Plaza in Laudanum, Rosehaven, beginning August 21st.  Please sign up via Vic Mornington or Lady Oriella Charik by no later than Sunday, August 24th.  No last-minute teams will be allowed.  It is highly recommended all teams practice with the scull boats.  The boats have a synchronized rowing anim…so you and your teammate need to work together to control the boat.
Countess Cassie Eldemar has made the Golden Oars trophy, and it’s QUITE impressive! Rora Stytwytch, from RFL ACTS team, is making each official team special racing shirts for the rowers.  If enough crew teams sign up, there will be a special pre-Regatta dinner held at Flock and Feather Tavern in Reverie, Rosehaven for the competing teams and their supporters on August 29th.  Plan on some good-natured taunting and possibly a food fight!

Doctor Holocluck Henly will provide wonderful music for the day.

Mark your calendars!  See you all at the Regatta!
Posted by Bixyl Shuftan at 6:01 AM