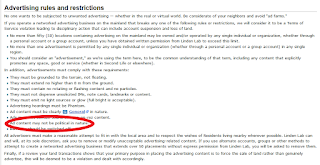 With America's Presidential Election Day in a little more than two months, it seems Linden Lab is trying to cut down on the size and number of political advertising signs.  In a Concierge and Land User Group meeting last Wednesday August 26, the rules about advertising signs were amended to include a prohibition on political ads in their rules about Ad Farms.

Shortly afterwards, it was brought up in the Second Life forums and subject to some debate. Some supported it. Some were solidly opposed it. Others felt it was well-intentioned, considering how sour political rancor has gotten, but smacked of censorship. 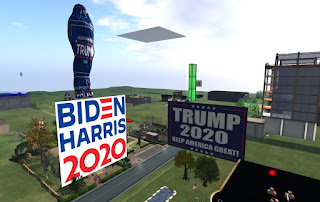 More than once in the forum thread, someone stated no one has to worry about taking down a "Vote for XXXX" sign from their home parcel on the Mainland, provided such signs are within common sense (no huge banners standing over 8 meters in the air, no flashing lights, etc.). Taking a look in one spot, the political signs themselves I saw seemed to be within the eight meter limit, though one guy was doing a subtle jab at the opposition by making what looked like a giant body bag with the other candidate's banner. When I checked the following day though, both the sign and the bag were gone.

The Newser has written very little on the 2020 Presidential Election this year. This is partially because of the lack of headliners like the Trump Manor , the Trump Wall, and the Trump Organization getting banned by the Lab four years ago, partially. The other reason is people yours truly talking to on Second Life and the Internet expressing their revulsion and exhaustion with the state of politics and political debate today. With the home stretch of the campaign season upon us, there will be some political coverage. But don't expect it every week.