It's not yet confirmed, but it may be the beginning of the end for Second Life's most well known group of supporters of Donald Trump.

On the evening of June 30, a member of the Hillary Clinton 2016 group, who requested to remain anonymous, stated that there was a group notice that JP Laszlo, the leader of the Trump Organization and a few other Trump groups in Second Life had been banned by Linden Lab and their sim, "The Wall," had been confiscated.

J.P. (jp.laszlo), leader of the biggest Trump group in Second Life got banned by the Lab and their main sim was seized.  J.P. and other associates no longer appear in people search or in any affiliated Trump groups.

J.P.'s group has been well known to troll SL residents (including us) with their political propaganda and harassment tactics.  I guess Linden Labs had enough of it. :-D 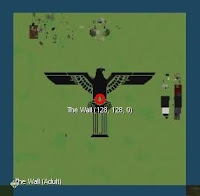 The notice was given by Priscilla Cox (Prissycox), the head of Hillary Clinton 2016.

A search for JP Laszlo both using inworld Search and on secondlife.com proved fruitless. The sim was still online when I checked. While it was blocked to visitors, it had been closed to them under JP as well.

Of exactly why JP and others of the Trump Organization were banned, the informer doubted it was for anything done with the Clinton group, "they had done some minor griefing to the Hillary HQ nothing major really.  So not sure what precipitated LLs big move last night." She had heard of a griefing incident at Bay City not far from where they had a building. But when I later talked to Marianne McCann, she had strong doubts that the Trump Organization was involved or that even if this were it would get a permanent ban in response as the incident in question was minor. However in the past, JP and his Trump Organization were accused of taking part in the outright griefing of Bernie Sanders supporters, in addition to the pranks they admitted pulling, such as the Trump Wall. Hamlet Au of New World Notes basically called for Linden Lab to ban members of the group for violations of Second Life's community standards. JP denied his group was griefing, "We are not trolls, just political activists with a sense of humor and fun." But others begged to differ,

More information may come in over the next few days, but with JP's account removed, it's doubtful he will be coming back to Second Life. While no doubt there will continue to be trolls harassing people in Trump's name, it seems the largest group of Trump supporters has just been swatted down. 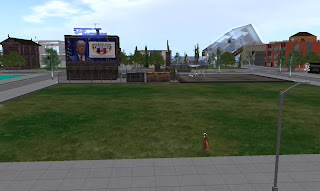 A visit to Lionheart Ahadi revealed that the Clinton HQ was no longer at the block it and the old Trump HQ had been on. It's owner Candace Larganta had earlier hinted it would be up until after the July 4rth weekend. But there was another Clinton building at
Lionheart Pumbaa (205, 210, 28). The Trump building by the old Trump Organization that had been across the street from it was gone to, though one biker bar did put up a Trump sign.

In real life, the primaries are over, and both Clinton and Trump are trying to unify their parties behind them. But a number of Republicans are reluctant to support Trump, and many "Berners" say they will not vote for Clinton reguardless of whether or not she gets Sansers' endorsement. In both Second Life and real life, it's been an interesting election.

*Addition*  Contacting JP Lazslo through his Facebook group "Donald Trump Still Thinks Your Waifu is S***," he confirmed that Linden Lab had indeed banned him and others in his group. He also made a short but to the point post on his Twitter account.