RFL Track: The Flood Party and the TearDown 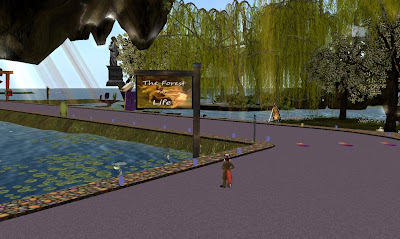 Wednesday July 20 was the last day to see the builds on this year's Relay for Life Weekend track. A few builds had already been taken down by the time the day started, and by mid-afternoon many more were gone. But some were still up such as "The Forest of Life." 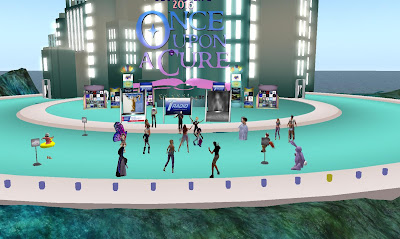 While many Relayers expressed sorrow, the sad feelings were eased somewhat by the expectations of the "Flood Party." Starting in 2010 as a spontaneous act of funnery after one sim manager raised the water level by ten feet, the Flood Party has become an unofficial Relay for Life tradition in SL.

Tsunami Warning Targets RFL SIMS - Flooding Expected
The impact of RFL of SL's 2016 Season has triggered a Tsunami and its focus is on RFL Activities Sim. 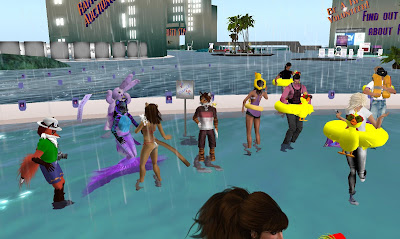 Unlike the first one, subsequent Flood party events have never resembled the deep end of a swimming pool. A few involved only a few inches of water. But that would not be the case this time. People gathered at the RFL Activities sim at 4:30, where Trader Whiplash was DJing some tunes, and before long, some rain started, and the water soon covered the ground. 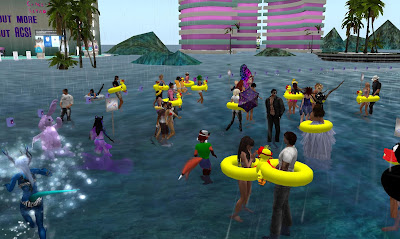 It wasn't much longer before the water covered the walkway around the stage. 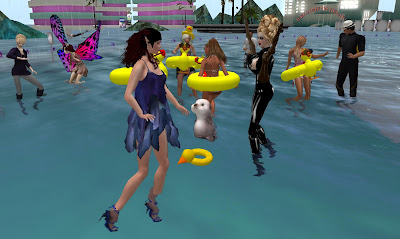 Rowena Dubrovna, who showed up in her tiny otter avatar, was soon having trouble keeping her head over the water. Someone rezzed a tiny float tube for her to stand on. 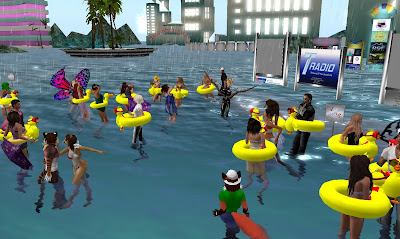 The water would eventually get knee-deep for most (or thigh deep for this 5'1" fox). While not exactly deep enough for certain felines to get their merfolk tails and "turn catfish," still deep enough for everyone to enjoy it. 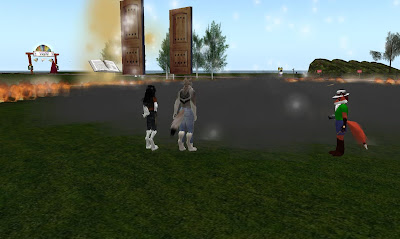 But not all was cheers for the Sunbeamer team. It was time to take down the builds at the camp, and Shockwave and Cynthia had waited until almost the last minute. But there were no tears. The build had been well documented, and had a place in the team's history as the first to win an award, "End of line." 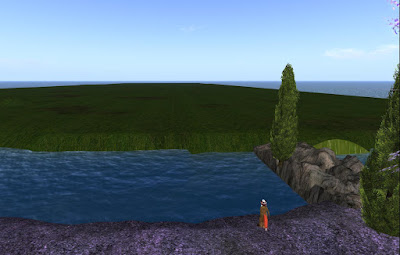 And so, the Relay track sims, once home to dozens of exhibits, were once again empty. And in a few hours, the sims would be offline and closed to the public.All except for the American Cancer Society, which remains up the whole year. The Relay Weekend had truly faded into the history books. But there's still the "Wrap-Up" party next month. And of course a whole new season next year.

Stay tuned a few more articles on the Relay Track.